Art Melendres concentrates his practice primarily in administrative, education, commercial and municipal finance law. For more than thirty-five years, clients have sought Art’s expertise when faced with disputes involving education, administrative law, commercial law or public financing. For more than twenty-five years, Art has served as general counsel for the Albuquerque Public Schools, a school district of more than 90,000 students and 11,000 employees. He regularly advises the School Board and the Administration on a variety of issues including employment matters, public finance, litigation, real estate and procurement. Art serves as lead counsel on all significant litigation for the Albuquerque Public Schools. In addition, he has been serving as a registered lobbyist for clients at the New Mexico Legislature for 20 years.

University of New Mexico, B.A. in Political Science and Economics, 1965 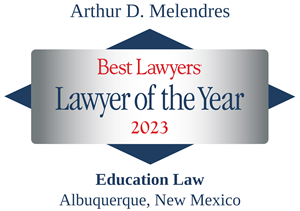