Best Lawyers in America® has named Chris 2023 “Lawyer of the Year” in Albuquerque for Public Finance Law. He was previously named “Lawyer of the Year” in 2016 for both Public Finance Law and Municipal Law, and in 2012 for Municipal Law. Chambers USA has recognized Chris in the area of Corporate/Commercial, and reported, he is a trusted and respected figure among clients, who note “he really immerses himself in our business, understanding what we do and why and contextualizing the excellent work that he does. This speaks volumes.” Additionally, Chris has achieved the AV® peer review rating from Martindale-Hubbell, the highest rating possible.

Prior to joining the firm, Chris served as a law clerk to The Honorable James A. Parker, U.S. District Judge for the District of New Mexico. Chris is a Modrall Sperling shareholder, previous Chair of the Public Finance Group, and has served as Head of the firm’s Transactions Department. 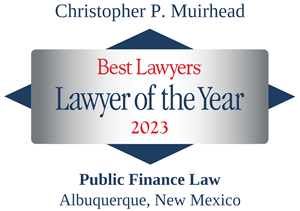