Recognized in the area of Natural Resources & Environment by Chambers USA, “Stuart Butzier is a standout name in the mining space, and is held in very high regard by clients and peers alike.” One client describes him as “highly professional and very much a guiding light,” while another notes that “he has a very clear understanding of the law and is a good strategist.” In 2021, Lawdragon 500 Leading Lawyers in America named Stuart one of the top 500 natural resources and energy lawyers in the country. Stuart was named by the Natural Resources, Energy and Environmental Law (NREEL) Section of the State Bar of New Mexico as the 2018 NREEL Lawyer of the Year. The award is given to a single attorney each year for “demonstrating professionalism and integrity, superior legal service, exemplary service to the NREEL Section, and service to the public.” Best Lawyers® has named him as “Lawyer of the Year” ten times in Albuquerque or Santa Fe for Environmental, Mining or Natural Resources Law. He has achieved the AV® rating from Martindale-Hubbell and has been selected to Southwest Super Lawyers®, being named a Top 25 New Mexico Super Lawyer from 2018 to 2022.

Stuart currently is the firm’s elected Vice President and is serving a fourth term as a member of the Executive Committee. He is a former Managing Director of the firm’s Santa Fe office. Stuart has devoted himself to ensuring that the firm’s attorneys and staff are primed to provide excellent, cost-effective service to clients. Stuart is a team player who is adept at helping clients and colleagues pursue their business and professional goals. He also helped to recruit many of the firm’s bright and diverse young attorneys.

Stuart is actively involved in professional and community non-profit organizations. He is a Fellow of  the American College of Environmental Lawyers (ACOEL), the Immediate Past President and a member of the Executive Committee of the Rocky Mountain Mineral Law Foundation, a past President of the University of New Mexico School of Law Alumni Association, and a past Chair of the Section of Natural Resources of the State Bar of New Mexico. Stuart also serves as Vice-Chair of the Mining Law Committee of the International Bar Association’s Section on Energy, Environment, Natural Resources and Infrastructure Law (SEERIL). He has contributed countless hours as program chair, author and speaker in connection with legal education programs and publications in New Mexico, throughout the West and internationally. In 2019 Stuart was appointed by the New Mexico Supreme Court to serve on its Proactive Regulation of Attorneys Committee.

Stuart’s civic involvement has included serving as President of New Mexico KidsMatter, a nonprofit group of volunteers serving as court-appointed special advocates for abused and neglected children, and as President of the New Mexico School for the Blind and Visually Impaired Foundation. He enjoys playing guitar in an active band and supporting the music scene in New Mexico. His other interests, apart from his family, include basketball (as a former college player and youth coach), gardening and natural landscaping, amateur photography and art.

Posted on December 7, 2020 By Modrall Sperling

Posted on December 1, 2020 By Modrall Sperling

Book Review: The Law and Governance of Mining and Minerals: A Global Perspective

Competitiveness of New Domestic Nuclear Power In the Post-EPACT Environment

Joint Development of Potash and Oil and Gas Reserves; The Tenth Circuit Defers to the IBLA Rather than to BLM 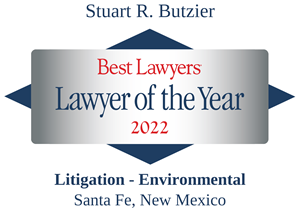