Walter brings more than thirty-five years of experience providing representation, advice and counsel to businesses and individuals in their dealings with Native American tribes, nations, Pueblos, and other groups, and with public land management agencies, such as the U.S. Bureau of Land Management, the U.S. Forest Service and New Mexico State Land Office. Walter’s practice is focused mainly on natural resources, energy and environmental law.

Clients throughout the west and across the country seek Walter’s advice in matters involving transactions, disputes and consultations with federally-recognized Indian tribes. In addition, clients look to Walter when pursuing federal lands leasing, development, and related permitting and environmental compliance efforts under the National Environmental Policy Act (“NEPA”), Section 106 of the National Historic Preservation Act, the Endangered Species Act, and related federal statutes.

Walter also is actively involved in community and professional non-profit organizations. He has served as President of the Rocky Mountain Mineral Law Foundation (n/k/a The Foundation for Natural Resources and Energy Law), a world-class continuing education provider for professionals working in the areas of natural resources development and environmental law. Walter also served as the Board of Trustees’ Chair of the Albuquerque Community Foundation (“ACF”) in 2019, where he has been actively involved as a Trustee since 2014.  He has also served as Co-Chair of the ACF Diversity, Equity and Inclusion Committee for three years, and as Chair of the ACF Impact Investment Committee for four years. In addition, Walter is a past Chair of the Board of Trustees of the Albuquerque Academy, an independent day school.

Nationally recognized in Native American Law by Chambers USA, Walter has also received top recognition in the area of Environment, Natural Resources & Regulated Industries in Chambers’ New Mexico review.  As reported in Chambers, Walter’s clients describe him as “outstanding,” and peers view him as a “great litigator.”  He has been listed by Best Lawyers in America® since 1995 and named “Lawyer of the Year” in Albuquerque nine times: in Energy Law in 2014, 2018 and 2023; Natural Resources Law in 2020; Environmental Law in 2016, 2019, and 2021; Oil and Gas Law in 2012; and Native American Law in 2011. Walter has achieved the AV® rating from Martindale-Hubbell, has been recognized as one of the Top 25 Super Lawyers in New Mexico by Southwest Super Lawyers®, and as Best of the Bar in Native American Law by the New Mexico Business Weekly. He is a Past President (2013 – 2018) of the firm, and currently serves as Co-Chair of the Natural Resources, Energy and Environment Department.

Walter enjoys his family, hiking, skiing, and mountain bike riding that does not involve crashing on boulders.

University of California at Berkeley, B.S. in Forestry, 1978, with honors

U.S. District Court for the District of Colorado

U.S. District Court for the Western District of Texas

Posted on February 5, 2016 By Modrall Sperling 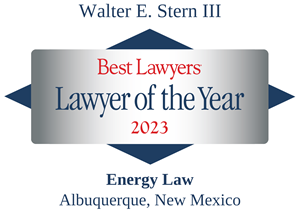